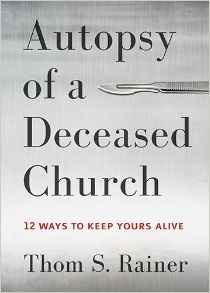 I believe Rainer hits the nail squarely on the head with this straightforward volume. While writing from an American context, much of the material is (appropriately) in reference to the American context. It is sad to read of hundreds of thousands of churches in the land of my birth and childhood that are showing signs of sickness, are very sick, or on their deathbed. Rainer outlines 9 characteristics of a dying church.

1. The Past is the Hero
2. The Church Refused to Look Like the community
3. The Budget moved Inwardly
4. The Great Commission becomes the Great Ommission
5. The Church is Preference Driven (as opposed to Christ focused)
6. Pastoral Tenure Decreases
7. The Church rarely prayed together
8. The Church had no Clear Purpose
9. The Church obsessed over the Facilities

In Britain’s dying churches, the past truly is the hero. ‘These are the days of small things’ is a common refrain, generally offered by an individual in a church where literally nothing is happening. ‘Oh that we had another Spurgeon or someone like Lloyd-Jones to set us straight!’ has been a helpless statement that has come to my ears. And yet, here and now, we have someone better. Jesus Christ. If people stop worshiping the past and looking to Christ then necessary changes will be made to better equip the church for serving in the present. I once was told by an older lady in a church, ‘I’m afraid we are very set in our ways.We don’t really like change’. It is no surprise to me that with many of that mindset, that church is on its way to death. And yet there is, as Rainer notes,  denial of the reality and angry resistance to the inevitable.

‘…more than any one item, these dying churches focused on their own needs instead of others. They looked inwardly instead of outwardly. Their highest priorities were the way they’ve always done it, and that which made them the most comfortable.’

Relating to the second point, it is all too common that I have visited, preached in, and/or helped in a church where the surrounding demographic is not reflected at all. An additional issue, that is even more common in Britain, I believe, is the refusal of churches to look like any type of community at all. Upon visiting some of the congregations I have been to, one would be forgiven for thinking that Christians are not supposed to like each other much less love each other (as Christ commands us). There is often a cold stoniness in receiving the message from God’s Word. People come in and they rush out. There is no flexibility in time or understanding when it comes to changing up the general order of service. If the chairs face a new way, there is a complaint. If the evangelist is zealous to get people involved in outreach, he is considered a nuisance. If there is suggestion of the need for more fellowship there are comments about busy schedules (after all, can’t miss the evening news or worse yet, Coronation Street.) The church is a family not a club. The church is a body not a bus. When a church is not what it ‘is’ by Biblical definition, it is dying.

The third point is interesting. I would be very keen to know the percentage of gospel churches in the UK that have a planned budget. It may be even more interesting to know how teach generous and faithful giving. A man attended a conference in my church, Grace Baptist Church (Angel, Islington, London) on the subject of Christian giving. He was convicted and challenged and said his pastor had never taught on the matter systematically in the Scriptures. Aware of the situation, I knew that there was not even an opportunity for giving an offering. He went to his pastor and shared what he learned. The pastor simply grunted and said ‘Yeah, its not something we’ve really done here that much. Might have to give it some thought.’ Without belabouring the point, Rainer gets across a point I have often sought to make – a giving church is a growing church.

As for points 4, 5, 7, and 8, one doesn’t have to look more than a second into the practices of deceased or dying churches in Britain to know that these relate. I believe in most cases the preferences of many church members as by Rainer are often what shape the neglectful attitude towards the Great Commission, prayer, and purpose. I have lived in the UK now longer than I did in the US and still hear comments on methods to the tune of ‘That is not the way we do it here’  when nothing is being done. I have sat in a meeting where at the close a pastor resisted a request from another elder to have a time of open prayer by saying ‘That’s not really necessary is it? We’ve gone on a bit long enough already!’. The sentiment was shared by many. It pretty much summed up the reason for that church’s decline and lack of purpose. In other churches, there has been such a pendulum swing reaction to some Christian’s falling to feminist ideology that women are not allowed to pray in public.

Points 6 and 9 are really the main points that need slight revision for a UK audience. While pastoral tenure can be linked to the decline in some churches, interestingly a recent census of Grace Baptist Churches indicated that an overly lengthy tenure could be just as detrimental. As I read Autopsy, it struck me that very small pastoral tenures are not as much a problem in the UK, but that in many cases pastors have fallen into the path Rainer notes from year 11 of a pastor’s tenure where he risks becoming resistant to change and the church grows complacent. Another, perhaps, more common problem in the UK is the hesitance of churches to call a pastor. Years and years go by with countless men preaching in the pulpit in a caring and challenging way, but without any call to the pastorate given. For some, lengthy absence of pastoral oversight in their church is worn as a badge of honour. These are churches that really, as much as they may whinge about their need, don’t want a pastor. At least, not one who will make any changes. Certainly not the one who didn’t wear a tie. Definitely not the foreign guy – he might attract other less than savoury sorts. The skubala you here from people trying to find a reason…

Point 9 relates to obsession with facilities. While in the past, even non-conformist churches in England would have fallen into traps of obsessing over gilding, memorials, and decorative fashion, most seem to have gone in the opposite direction in their treatment of facilities. In the 13 years I have lived in London, I have assisted in countless clean-up days in which a building of a deceased church has been made ready for the arrival of a new work. With many it is clear that not only has the building been systematically allowed to fall into dilapidation and decay, but little attention has been paid to basic cleaning. I remember cleaning one kitchen that contained products containing 1980s use-by dates! There really is no excuse.

Autopsy is not about doom and gloom. Its primary purpose is to show where we can learn from others’ mistakes and failures and prayerfully seek to see our churches grow from strength to strength for God’s glory. Rainer closes each chapter with a commitment to pray in a particular way toward to health of our local churches in the knowledge that the gates of Hell will not prevail against Christ and those who are truly His. The second part of the book gives sound, hope-filled, and helpful application to those whose churches are showing signs of sickness, are already sick, or are dying.I won’t spoil it for you though!
I cannot recommend this volume enough. Get a copy and prayerfully read through it, seeking to assess your own church’s situation and what you can do to make it better.