A Walk with God

By faith Abel offered to God a better sacrifice than Cain, through which he obtained the testimony that he was righteous, God testifying about his gifts, and through faith, though he is dead, he still speaks.  By faith Enoch was taken up so that he should not see death; and he was not found because God took him up; for he obtained the witness that before his being taken up he was pleasing to God. And without faith it is impossible to please Him, for he who comes to God must believe that He is, and that He is a rewarder of those who seek Him.

You cannot walk with God when running from Him

In the beginning, immediately after mankind’s sin that results in the fall from right relationship with God (Genesis 3) there is an implication in Genesis 3.8 that it was not unusual for God to walk with Adam and Eve.  The idea of ‘walking with God’ conveys the idea of closeness, intimacy, and fellowship. After mankind’s sin, the sound of God walking causes man to run from God rather than to him. This pattern is repeated throughout the Scriptures. Cain is warned by God to not allow sin to seize him (Genesis 4). Cain murders Abel and tries to cover up his guilt without success (“Am I my brother’s keeper?). Rather than walking with God, he runs from Him and reaps the consequences.

Where others who are finally faithful fail, we see their failings accompanied by a seeming developed distance between the individual and God.

Think about a couple of familiar cases.

Samson and his conquests and exploits (not speaking so much of the battlefield as the bed here): running away from God and His way.

David and Bathsheba: David’s taking of Bathsheba follows a slow but steady regression in which David takes multiple wives (going against God’s law for kings in Deuteronomy 17.14-20) and his relationship with God seems far from close at the time.

Solomon: Once said to be the wisest man and the writer of much of the Proverbs, Solomon foolishly took many wives who worshiped different gods. Having already begun to wander in His closeness to God, this drew him after other gods and other purposes. Ecclesiastes seems to recount the tragic and vain wanderings of Solomon to rediscover that a truly successful life is one that fears God and keeps His commands (Ecclesiastes 12.13)

While Adam was still alive, Enoch was born. It is said of Enoch in Genesis 5.21-24 that after he fathered Methuselah, he “walked with God” 300 years and then was removed from Earth in a way other than death. Not much is known about Enoch beyond this and the commentary of Hebrews 11. But we can discern from the strange name of Methuselah, which means something to the effect of “when he dies, it will come” that Enoch seems to have realised the consequences of mankind’s running from God. The year Methuselah died, the flood of Noah’s day destroyed the world. Enoch was clearly a man of prayer and in this walked with God.

Prayer is walking with God

Real and successful prayer cannot be offered to God without believing 1.) that God exists and 2.) that He rewards those who diligently seek Him.

It is interesting how many people will suddenly pray about something they want or genuinely need, but they either 1.) don’t actually believe in God but are “just giving it [prayer] a go” or 2.) believe God is real but spend most of the time behaving as if He isn’t or doesn’t care about our action or 3.) approach God believing He is, but doubting whether or not He is good or is the giver of good things. In the first two cases, prayer should not be expected to be answered unless it a prayer of repentance and faith; God is and calls for us to acknowledge and worship Him. In the latter case, the letter of James chapter 1 says this individual shouldn’t expect anything from God because of the individual’s double-mindedness and instability in how they approach God.

In order to truly pray you must first approach God for who He is and what He does, believing in Him as He has revealed Himself in Jesus Christ (Hebrews 1.1). Walking with God and praying to Him go hand in hand. 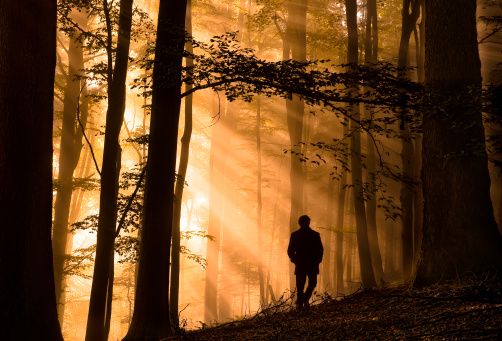